A Master Lesson In The “Art” Of Arrogance? 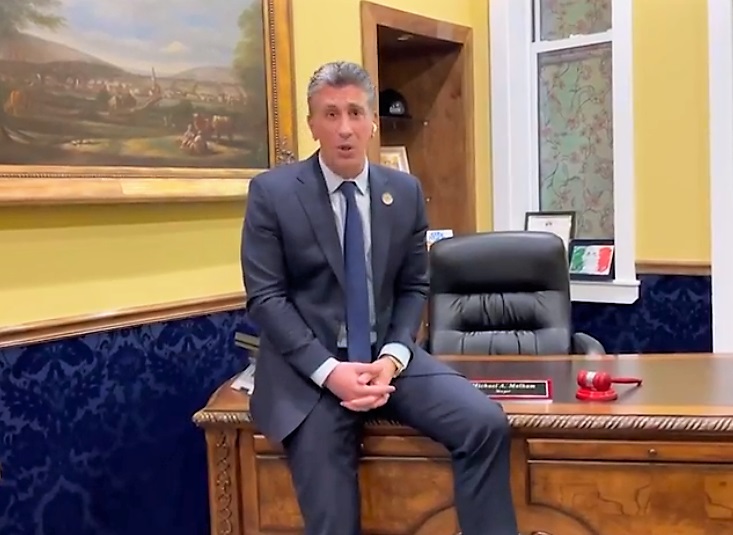 Screenshot capture of a recent video featuring Mayor Michael Melham in the mayor's office. The 1831 painting "Landscape of Belleville" can be seen to the upper left.

Imagine you own a classic car. You found it needing repair, bought it and restored it as best you could. You insure the car due to its high appraisal value. You keep it on your property, but protect it from the elements.

Soon, however, you feel the car ought to be publicly displayed. A prestigious and well-attended car museum agrees to display it, owing to its rarity and high value.

One day, however, the museum’s board president decides the car would look better in his driveway. The museum board votes to allow this, without obtaining your permission. You might, conceivably, be upset.

The Belleville Historical Society and David Hatch — whose family donated the painting to the Society — now face a similar situation.

The painting “Landscape of Belleville,” an 1831 painting attributed to Philadelphia artist Thomas Natt — which was donated to the Belleville Historical Society by Hatch and his family — has been on display at Belleville Public Library since 1963. It now hangs on a wall in the mayor’s Town Hall office.

Library Board Votes To Loan Painting to Mayor

The Belleville Library Board of Trustees, at its June 17th, 2020 meeting, voted to loan the painting “Landscape of Belleville” to Mayor Michael Melham’s office for the duration of his tenure. Neither Belleville Historical Society president Michael Perrone nor Hatch were notified of the library’s board’s action.

Melham was president of the library board in 2020. The vote was unanimous among the board members present, the majority of whom Melham appointed.

By all indications, the Belleville Library Board of Trustees — helmed at the time by Mayor Melham himself — voted to relocate a painting belonging to the Belleville Historical Society and on loan to the library, to the mayor’s private office in Town Hall, all without the Society’s consent.

The Painting And Its History in Belleville

“Landscape of Belleville” was painted in 1831 and is attributed to Philadelphia artist Thomas Natt. In the late 1950s, David Hatch — a child at the time — found the painting in the basement of his family’s Smallwood Avenue home.

Hatch and his family are direct descendants of Josiah Hornblower, a Revolutionary War patriot and later a member of the Continental Congress, who resided in Belleville and constructed America’s first steam engine. The Hatches are also descended from the Stephens family, early and prominent Belleville inhabitants.

In a phone interview, Mr. Hatch — now living in Connecticut — said he found the painting and frame covered with dirt and grime. Hatch cleaned the painting as much as possible with soap and water.

The Hatch family soon realized it was a unique painting of Belleville, and in 1962, donated it to the Belleville Historical Society. The Society, through its efforts and those of prominent Belleville residents, ensured the painting’s restoration.

The Belleville Historical Society loaned the painting to the Belleville Public Library for public display around 1963. Hatch said that, for a long time, a small document appeared next to the picture, explaining the donation and the painting’s history.

Hatch said the last time he visited Belleville about 5 years ago, he went to the library and saw the document by the painting was missing. Library personnel allegedly told Hatch the document went missing during renovations and would be replaced.

Additionally, several newspaper clippings attest to the Society’s ownership of the painting. A July 7, 1964 Belleville Times article notes that the Belleville Historical Society had the painting restored, and had loaned it to the library until the Society had its own headquarters, which to this day it does not.

The painting’s new location came up during the February 23rd Town Council meeting via Zoom, when Township Clerk Kelly Cavanagh read into the record an e-mailed public comment by Belleville resident Vincent Frantantoni.

Frantantoni stated he was aware a valuable painting was now in the mayor’s office, and that Mayor Melham’s library board appointees had approved a resolution to loan it to Melham’s office. Frantantoni further stated that the painting belongs in the library where all can enjoy and view it.

Are we really expected to believe that anyone — from the youngest Belleville resident to the town’s oldest — could go in and view the painting in the mayor’s office without making an appointment? The library is one of the few truly public institutions left in America today, and the painting, by all reason, should remain in our town’s library.

Melham scoffed at Frantantoni’s comment. With the painting in full view behind him, he claimed that when he went to his first library board meeting as mayor, he was upset to find the painting leaning against the wall in a hallway. It’s known that painting and other final activities connected to the renovation of parts of the library had occurred in 2018, so it’s possible Melham saw it in that position at that time, as painting and cleanup of the atrium room was being completed.

Melham admitted the painting was soon displayed again in the library’s atrium, but after the atrium was re-painted, claimed that the acting library director didn’t believe the painting fit with the atrium’s contemporary look, and therefore wasn’t sure what to do with it. Belleville Watch e-mailed acting library director Frances Bacardi for comment about the mayor’s claims, but received no reply.

Despite his claims of good intentions, Mayor Melham thinking he could relocate to his office a privately-owned painting — a singular historical artifact loaned exclusively to the library — is just one more example of his notorious arrogance.

(Editor’s Note: Readers can view video of Mr. Frantantoni’s comment and the mayor’s response by clicking the link at the beginning of this section; the segment is from 1:05:49 – 1:09:25.)

Taken all together, what occurred with the painting leaves a question: Did the Belleville Library Board of Trustees make, at the very least, an unethical decision?

Belleville Watch e-mailed the New Jersey Library Association and the Smithsonian American Art Museum regarding this matter. No replies were received.

A Google search of artwork loaning procedures produced several examples of artwork loan contracts. In almost all cases, the museum or nonprofit’s art loan paperwork made significant mention of notifying the donor of any changes to placement, damage or any other action taken with regard to the donated artwork.

As artwork can be highly valuable as well as fragile, it stands to reason that an institution’s decision to loan out donated artwork would require at the very least notifying the donor, if not obtaining express permission. It would make sense that an artwork loan agreement would cover the possibility of loaning the artwork out to another institution.

The fact is that no such loan agreement appears to exist with regard to “Landscape of Belleville,” and therefore the painting should never have left the library. The painting belongs to the Belleville Historical Society, which loaned the painting to the library for display; no terms or stated permissions related to loaning it elsewhere exist.

Since being loaned to Belleville Public Library in 1963, and despite the many changes the library has undergone — including a modern addition 40-plus years ago — “Landscape of Belleville” remained, until recently, on display there. None of the 15 mayors from 1963 to 2018 — from Padula to Kimble — saw fit to relocate the painting from its rightful location.

“I am writing to inform you that my family’s long treasured painting, ‘Landscape of Belleville,’ has been taken from the Belleville Public Library and is being used to decorate a private office in Belleville Town Hall,” the letter begins.

“My father Joseph’s greatest fear was that our painting might someday end up hanging in the office of some politician,” the letter reads, in part. “Entrusting the painting to the Belleville Historical Society and having it on display in our library for all to appreciate guaranteed that that would never happen.”

The painting made another appearance behind Mayor Melham during the March 9th Town Council meeting via Zoom.

Melham and the Township’s response to Hatch’s letter remains to be seen. What is especially interesting — although unsurprising — is the deafening silence among Town Council members about this matter. Can they truly believe it’s permissible to allow a privately-owned painting loaned to the library to be relocated to a politician’s private office?

Belleville Watch e-mailed Melham for comment about the board’s action, but received no reply.