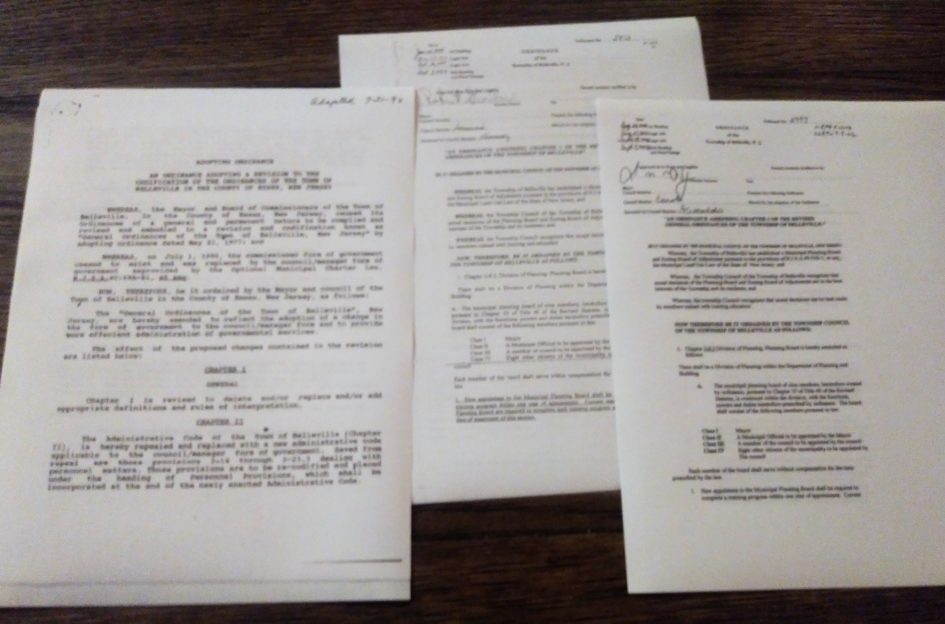 Note: This is the second part in a multi-part series about the Planning Board and its activities since the election of Mayor Michael Melham’s BetterBelleville slate of candidates in 2018. You can read Part One here.

Following the Guaman matter mentioned in Part One of this series, discussions about Planning Board appointments took on another tone, as Mayor Michael Melham seemed to profess a belief that he could appoint the vast majority of planning board members. At just around the same time, the planning board’s webpage on the Township of Belleville’s website changed — radically.

On July 1, 2018, when Melham and councilpersons-at-large Thomas Graziano and Naomy Depena were sworn into office, the planning board webpage bore a certain description of planning board member classes and how they are appointed. It had looked like this since at least 2015:

Toward the end of the summer of 2018, Melham’s website development business, AlphaDog Solutions took over as the township website’s webmaster. (Mayor Melham claims his business has not charged the Township of Belleville for this service.) On June 24th, 2019, the planning board webpage looked a bit different, with a map added but still with the language from N.J.S.A. 40:55-D intact. If you look at the Township’s list of ordinances, under Chapter 19, you will see the very same language as above.

The planning board webpage on the Township of Belleville website mysteriously changed sometime between June 24th and July 9th, 2019, suddenly reflecting language claiming the mayor could appoint most of the planning board members. Mayor Melham’s business AlphaDog Solutions has been operating the town website since at least late summer of 2018.

In a case of convenient timing, on July 8, 2019, Melham sent several communications to Township Clerk Kelly Cavanagh, appointing and re-appointing several planning board members. Those communications cited “Township of Belleville ordinance 19-1” as the basis for his appointment authority. The next day, residents confronted Melham about this at a town council meeting.

New Text On Planning Board Webpage Taken From Outdated Ordinance

The commission form, like the one governing neighboring town Nutley, basically has five commissioners, each one head of a specific department (Recreation, Public Works, etc.) The commissioner elects one of their own as mayor. The title of mayor is largely ceremonial, and there is usually no “chief executive” in a commission government.

Belleville’s council-manager form of government distributes power equally among the council members, which includes the mayor. Voters elect the mayor but the mayor serves only as a seventh council member. Besides presiding over council meetings, the mayor has few, narrowly-defined privileges. The township manager — hired by and serving at the pleasure of the town council — is the government’s chief executive, running day-to-day operations.

With all this said, after Belleville adopted the council-manager form of government on July 1st 1990, the council repealed all but a few of the ordinances existing under the commission form.

Mayor Melham, seemingly emboldened by the silent complicity of many on the Town Council, wrongfully assumed authority over most planning board appointments by invoking an ordinance that existed under Belleville’s commission form of government, extinct for over 30 years.

In July 1990, the new township council passed an ordinance establishing the planning and zoning boards, as dictated for a council-manager form of government by state law.

A 1999 ordinance required all new planning and zoning board members to attend training within one year of their appointment. A 2003 ordinance made additional minor changes.

An ordinance passed on June 9th, 2020 made more changes to the ordinance, but again did not change the manner in which planning board members are appointed.

Coming Soon: Part 3: In Which We Investigate Yet More Disturbing Aspects of The Planning Board Power Grab!