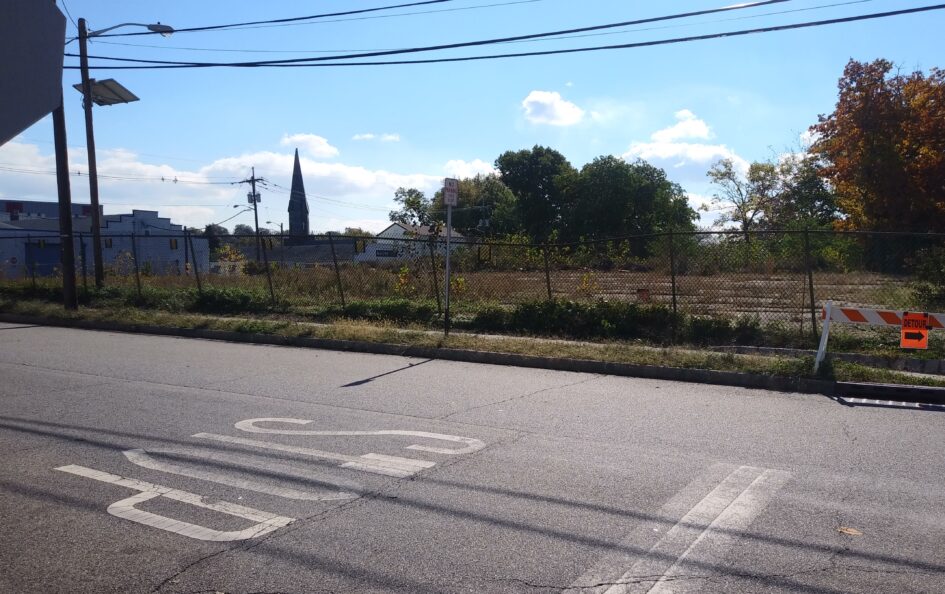 (The Belleville Planning Board will have a meeting via Zoom on Thursday, November 12th at 7 p.m. The School 1 property is slated to be discussed. Instructions are below or can be accessed by clicking November 12th on the town calendar here.)

“What’s happening with the School 1 property?” is a question a few Belleville Watch readers have asked, most recently a couple of weeks ago. By all indications, the planning board had in 2016 approved a Quik-Chek for the property.

However, that may soon change. The Township of Belleville recently published a public meeting notice stating the Planning Board would consider changes to the property’s approved use. The next Planning Board meeting is at 7 p.m. on November 12th, via Zoom (see instructions below.)

According to the public notice, the planning board will consider an amendment to the property’s existing redevelopment plan. The amendment would “add a new residential district along the frontage to Academy Street,” this shrinking the property’s commercial use.

School 1: A Long and Controversial History

School #1 was apparently an active elementary school until around 1980, in later years becoming storage space and administrative offices for the Board of Education. As the years went on, the school fell victim to the elements and disrepair.

Media reports state the Board of Education unsuccessfully attempted, several times, to sell the property in the late 1990s and early 2000s. Had the property sold, the proceeds from the sale might have been used to make roof repairs and other improvements to other Belleville schools. Some residents strongly opposed selling the property, stating the school needed to be rehabilitated and repaired to accommodate an expected increase in school enrollment.

In 2000-2001, the property was included in a large-scale (and unpopular with Belleville residents) redevelopment plan for Belleville’s Valley section, supported strongly by then-4th Ward Councilman (and now mayor) Michael Melham. The Board of Education apparently sued the planning board over the proposal, but later ended the lawsuit after the new mayor and council — elected in May 2002 — abandoned the redevelopment plan.

In 2011, the Board of Education sold the property to the Township of Belleville for $1. This sale was one of many questionable decisions and actions that state auditor Stephen Eells noted in his 2018 report on the Belleville Board of Education and its $3.7 million deficit in 2014. Eells noted that by selling the property for $1, the district lost out on nearly $500,000 in revenue.

As part of the sale, the township demolished the school building and cleared the property in 2013. According to NJParcels.com, the township sold the property to its current owner, O & R Urban Renewal Corporation LLC for $1 million that same year. O & R shows up in campaign reports as having contributed to 4th Ward Councilman John Notari’s 2016 re-election campaign.

In late 2016, the Planning Board approved a plan to build a Quik-Chek on the property. The store apparently would be built facing Rutgers Street, allowing for traffic to enter and leave from that road. This proposal was heard before the planning board after the developer allegedly dropped plans to build multi-family residential buildings.

Amendment to the Redevelopment Plan: Residential Development’s Back on the Menu

The proposed amendment to the redevelopment plan to allow a residential portion on the property, facing Academy Street fits in well with Mayor Melham’s development agenda for Belleville, which seems to favor high-density residential development, in the hopes that younger people with disposable income will move to town.

Recently, the town held two groundbreaking ceremonies in the same week for two “mixed use” developments (both containing more residential units than commercial/retail.) These projects had their origins in the Kimble administration, but Melham and the planning board quickly accelerated both to approval, after amended plans were submitted. Melham and the planning board seem unbothered by the strong possibilities of more traffic, more people using the town’s already stressed infrastructure and more children in the schools these developments may bring.

Traffic traveling north on Main Street (one of Belleville’s main traffic arteries) use Academy Street to access either Stephens or Cortlandt streets, which offer a left-turn onto Rutgers Street, leading to the Belleville Turnpike Bridge. The intersection of Cortlandt and Rutgers offers a traffic light, but the one at Stephens and Rutgers does not.

Any person living in Belleville for even a short amount of time, or anyone who commutes through Belleville from across the Passaic River, has undoubtedly had experience with traffic in that area. It’s a rare time of day when huge amounts of traffic aren’t travelling the eastern part of Rutgers Street. Attempting to make a left onto Rutgers Street from Stephens Street is often a harrowing experience, with the large amount of two-way traffic on Rutgers Street.

An argument often made by proponents of high-density residential development is that if a development is built near public transportation, residents will take buses or trains to get places. Even in true, residential development at School 1 would probably fail in this aspect. Only the DeCamp line travels the eastern part of Rutgers Street, crossing the Belleville Turnpike Bridge. Also, the NJ Transit #13 bus travels Washington Avenue; however, it’s a bit of a walk to the Rutgers Street/Washington Avenue bus stop.

Perhaps the developer is gambling on the possibility of the much-discussed Paterson-Newark light rail line, which may potentially use the Conrail line that passes through the Valley; the project’s future, however, remains uncertain. Such a light rail wouldn’t necessarily cut down on vehicular traffic, either; Belleville’s Silver Lake section has had a stop on the Newark Light Rail for 20 years, and traffic in that area has become more, not less, congested. Additionally, the proposed light rail could result in more traffic jams on major arteries like Rutgers and Joralemon streets, when light rail cars pass crossings.

Faced with limited public transportation options, and with people needing to get around, it’s likely residents of a School 1 property development would need an automobile, thus further congesting Belleville’s streets.

Allowing residential development on even part of the School 1 property would further increase Belleville’s density population, which is close to 11,000 people per square mile. More people means more use of our infrastructure (roads, sewers, water mains) and increased demand for town services. As stated above, residents of the new development would most likely own cars, creating more traffic. Finally, like all other high-density residential development, there’s the possibility of more children being enrolled in our already overcrowded school system.

A commercial use — like the Quik-Chek the planning board approved for the property in 2016 — would likely be profitable, as the property is located on a busy street, and connected by a bridge to Hudson and Bergen counties. A profitable business translates into a tax ratable for the town.

The last thing Belleville needs is more people and more traffic. The Planning Board is wise to vote down this proposal and keep the property commercial.

Board of Education, Hoboken On The Passaic, Michael Melham, Planning Board, responsible development

𝐁𝐞𝐥𝐥𝐞𝐯𝐢𝐥𝐥𝐞 𝐖𝐚𝐭𝐜𝐡'𝐬 𝐅𝐢𝐫𝐬𝐭 𝐀𝐧𝐧𝐢𝐯𝐞𝐫𝐬𝐚𝐫𝐲 -- 𝐈𝐭'𝐬 𝐎𝐧𝐥𝐲 𝐓𝐡𝐞 𝐁𝐞𝐠𝐢𝐧𝐧𝐢𝐧𝐠!A little more than a year ago, Essex Watch founder Lee Dorry asked if I would run his new watchdog platform for Belleville, simply called Belleville Watch. After considering the offer for about a week, I accepted. Belleville Watch went officially live on February 27, 2020!I have always loved to write, encouraged by great mentors who recognized and nurtured my talent. I feel energized, writing to promote the values of civic engagement, good government and responsible development in Belleville!I want to thank Belleville Watch's readers and supporters, of which there seems to be more and more. One of the great joys of writing is to connect with readers, and I look forward to encouraging and inspiring even more Belleville residents to get involved, ask more questions and demand better from our elected officials.This coming week, I will publish several pieces in celebration of this anniversary, and please know, dear readers:𝐓𝐡𝐞 𝐟𝐢𝐫𝐬𝐭 𝐲𝐞𝐚𝐫 𝐢𝐬 𝐨𝐧𝐥𝐲 𝐭𝐡𝐞 𝐛𝐞𝐠𝐢𝐧𝐧𝐢𝐧𝐠! ... See MoreSee Less

𝐁𝐞𝐥𝐥𝐞𝐯𝐢𝐥𝐥𝐞 𝐖𝐚𝐭𝐜𝐡'𝐬 𝟏𝐬𝐭 𝐘𝐞𝐚𝐫 𝐀𝐧𝐧𝐢𝐯𝐞𝐫𝐬𝐚𝐫𝐲 -- 𝟐/𝟐𝟕/𝟐𝟏This past weekend, I celebrated the very important "year before a half-century" birthday. But another big milestone is coming up on Saturday -- Belleville Watch's 1-Year Anniversary!In the coming week, I will work hard to post a few anniversary pieces!Thank you, dear readers, for your support and interest in Belleville Watch! ... See MoreSee Less
View on Facebook
· Share