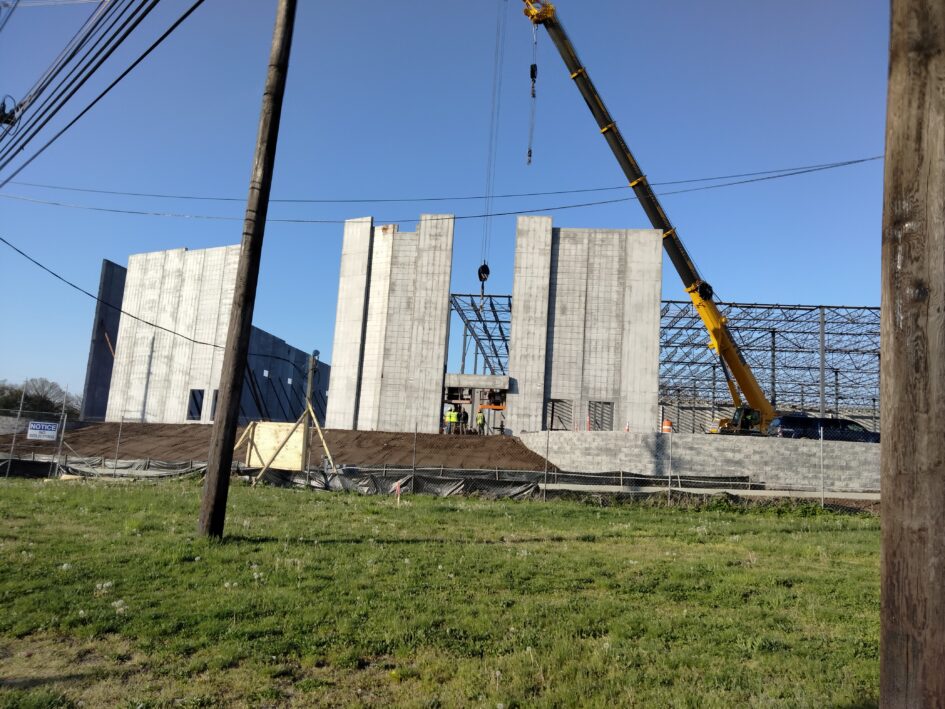 Longtime Belleville resident and former Roosevelt Avenue commercial property owner Jeff Mattingly helped lead the fight against plans to redevelop the Valley section wholesale in the early 2000s, supported if not spearheaded by then-councilman (and now mayor) Michael Melham. Here, he takes issue with Melham’s recent Facebook post about the warehouse development on the former Walter Kidde property and his advocacy of tax abatements and Payment In Lieu of Taxes agreements.

The content and opinions in this piece are exclusively Mr. Mattingly’s and do not necessarily represent those of Belleville Watch.

Cha Ching! That’s the sound we should hear when we see progress like this. This is the

24-acre site down on Main St, near the Nutley border.

For decades it was a vacant and environmental contaminated property, yielding little

revenue (proportional to its size) for the Township. After all, vacant land, pays far

less in taxes, than land with a structure on it.

As I’ve been saying, the Melham Team has worked hard to find new revenue such as this.

After all, the end result is cleaner land, stabilized taxes, and ZERO impact to the

School District. This will be a modern warehouse building, approx. 280,000 sq/ft, similar

Sadly, my opponent, who’s been on the Council for 18years, hasn’t figured this out yet.

And let me fill you in on something, if he hasn’t gotten it by now, he’s NEVER going to

get it.  After all, he thinks me selling by Belleville home, and purchasing another

Belleville property is somehow wrong.  SMH. He doesn’t even understand the basics.  Which

is precisely why, during his tenure, 18 years, your property taxes skyrocketed, year

taxes.  Remember, last year’s increase was only $38 for the average accessed property and

this year’s budget is expected to be equally as good.

“Cha Ching! That’s the sound we should hear when we see progress like this. This is

the 24-acre site down on Main St, near the Nutley border.“

This 23.7-acre site was cleaned by the Finkelstein bothers – also known as 675 Main St. They were the former owners of the property and cleaned it with their own money of the industrial pollution there that was not of their making – as the State of NJ hoped would occur as buyers of formerly used industrial land. The land itself (soil) was ultimately cleaned to  NJDEP standards and the owners were granted the coveted “No further action  required” letter by the DEP. The soil was clean and was now capable of being redeveloped in any capacity.

Then it came to light that underground water pollution was documented. It had already cost the Finkelsteins several million dollars to get their property to this point between the taxes and cleanup expense. “yielding little revenue (proportional to its size) for the Township” according to Melham. The fact is during the lengthy amount of time it took to get the soil pollution identified and cleaned by the owners, they came to pay more than $500,000 a year in property taxes every year. During those years, they paid their taxes in full and on time every quarter resulting in many millions more paid into our town, schools and county.

“As I’ve been saying, the Melham Team has worked hard to find new revenue such as

this.  After all, the end result is cleaner land, stabilized taxes, and ZERO impact to

The Finkelstein property was cleaned out of their own pockets and with no help from anyone local, county or state. I know of no other industrial redevelopment properties here in Belleville that can make this statement under this administration. Yes! This redevelopment will have no impact on the schools, other than to fund them through land taxes in their budgets, saving taxpayers money they’d otherwise have to pay should it have involved residential zoning use.

During the ensuing time, others were interested in redeveloping this property. All prior efforts to attempt a workable plan to develop this property over the last 21 years presented to the Belleville Planning Board were for residential projects, once all businesses had walked away due to economic downturns and or in cleaning delays. Investors don’t want open-ended projects until they are totally cleaned and ready to build on, not necessarily having access to taxpayer funding incentives.

As time went on, 3 residential projects were presented, by Regan/Bischoff, would-be mixed-use developers, to the Planning Board for this property. All 3 were approved by the Planning Board for 3 different high-density proposal degrees, giving a potential developer choices to pursue.  The 1st called for two 50-story residential towers to be built less than 100 feet from the high-tension power lines that bordered the property, directly to the north, that would have literally towered over them. The power lines also have high-pressure gas buried under them being part of the national power grid.

Belleville advocates were instrumental, in my opinion, in stopping those projects, showing that there would be no way of getting off of the property during flooding, with the railway and national power grid easements to the west and north, and flooding to the east, which frequently occurs in the course of the year.

The only way left to exit the property is from Kidde Place, a short ½ block long street that tees into Roosevelt Ave. which has homes and businesses. Directly across the street from my former building, Kidde Place was traditionally used as an emergency access/exit by Walter Kidde Industries. The new redevelopment plans have retained the street’s use the same way on the approved plans. Roosevelt Ave. is a 1.5 block long street that runs from the flood zone on Main St to the Railroad tracks. It does flood, repeatedly sometimes halfway up the street until tides twice a day drain it. I’ve seen it reflood twice a day for as long as 5 days in some years, swamping cars that venture in past barriers at the wrong time, leaving them swamped and stranded.

“This will be a modern warehouse building, approx. 280,000 sq/ft, similar to those

The Planning Board approved the 358,000 square-foot building that will most likely be opened by a “big tech” business, something that Belleville advocates fought long and hard for in Planning Board meetings – to retain the industrial use of property, seemingly against high-density housing redeveloper proponents.

Michael Melham’s search for “new revenue sources” includes primarily developing high-density residential properties, the highest source of taxation possible for the town, and the highest also for the taxpayers.

Industrial-zoned revenue never puts children in schools, that I know of. Commercial zoning commonly doesn’t either. They commonly do not require additional uniformed workers of any type. Those types of zonings are required to contract separately for their own for their services and all land uses.

Residential development uses expensive services. Town services include DPW collections with dumping (tipping fees) that are contract-based and escalate annually. The need to accommodate additional water, sewer treatment, and stormwater runoff too.  Our below-ground piping is antiquated and in need of replacement, as most of it is 100 or more years old and breaks regularly. Where is that action plan, Mr. Melham, as you expand all over town?

All NJ uniformed workers are recommended to be increased per 1000 residents in their various capacities proportionally, as we hear during contract negotiations. That means more police, fire, DPW and their equipment as they all expand. Salaries, pension and benefit contributions are very expensive to the taxpayers, Mr. Melham. You also do not mention that no considerations are made of the eventual need for more schools, with all of those high-density rental apartments that you and your friends are granting tax abatements to developers to build. All of the towns around us are suffering from that, as they already have done much of it. Those developer tax breaks — that residents don’t get — are for per-square-foot considerations of living space. Instead, he promotes the Kidde property as his success, something that he had nothing to do with and even stalled, in my opinion.

Our property taxes and rents fund our schools, town services and county government. PILOT-funded tax abatements benefit only the town, 95% and 5% to the county. Nothing to the schools. Will these PILOT-funded rental residential projects introduce potentially hundreds if not thousands of new children in our schools? You bet they will! Our schools are already operating at full capacity, according to our Schools Superintendent.

Mr. Melham is also threatening to use eminent domain in the Valley to take 681 Main St. – Belleville Industrial Park. This property was identified as a Federal Superfund site by the EPA in the 1970-80’s that was determined as requiring remediation before redevelopment. Tenants at that property were fined by the EPA as recently as within the last 10 or so years. What most older people who have lived in Belleville generally suspect is that that property also will be developed residentially, also without any cleanup.

115 Belmont, Belleville is now a mixed-use and rental residential site and sits on some of the worst industrial pollution in the history of Belleville. It was left that way by the Edison Battery Manufacturing & Chemical Works before the company was dissolved. That property was also identified as in need of remediation by the EPA as a Superfund Site during the same period in time.

Dr. George Hill’s book, Edison’s Environment, devoted an entire chapter to that very site.  During the Planning Board plan approval hearings, there was no proof shown of any effort to clean and remediate the soil or groundwater pollution. The LSRP (Licensed State Remediation Professional) testified under oath that there had been remediation, but showed no proof to the public or the board of it. I have been told by long-time residents there was no remediation, yet the land was redeveloped under the Michael Melham administration anyway. Dr. Hill’s chapter in his book is truly frightening of what potentially lies just under the surface of the ground.

People who lived on Heckel Street suffered from the pollution from the company, and their accounts contributed to successfully suing the Edison Co. in 1912, as I recall reading.  What immigrant workers, who typically would have lived and worked in the plans at the time, could have successfully sued Edison in the height of his carrier without hard proof back in those days?  Those of us from our town who testified at the Planning Board about the present conditions of the property were appalled by the process and end result. We made sure that the entire process was videotaped and archived for future reference.

Cha-ching indeed, Mr. Melham; just not for the residents of Belleville!