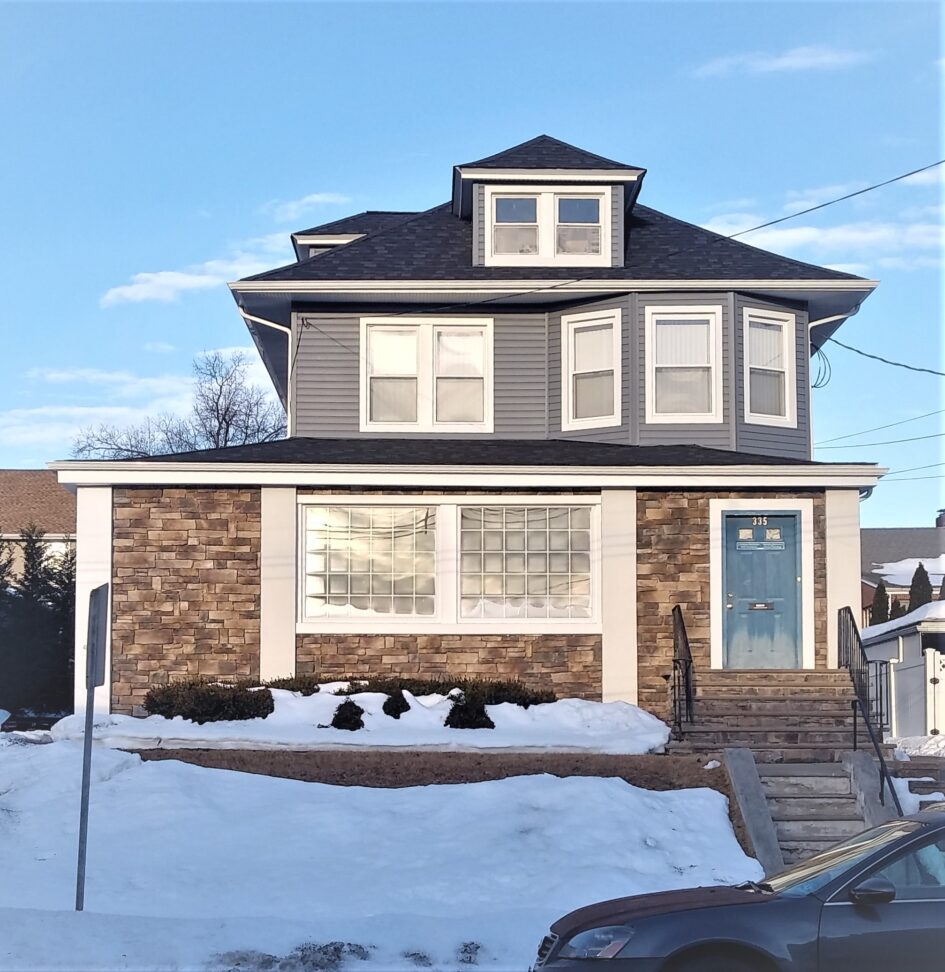 The Board of Education voted on January 25th to lease property owned by Mayor Michael Melham. He now stands to be paid upwards of $180,000 in taxpayer money.

In the hours prior to the January 25th, 2021 Board of Education meeting, its published agenda listed a short resolution:

Board trustees Gabrielle Bennett-Meany, Ralph Tunis, Frank Velez and Nelson Barrera voted to approve the lease. Trustee Luis Muniz abstained from the vote, and trustees Christine Lamparello and Erika Jacho were absent from the meeting.

Following former board trustee Michael Sheldon’s comments about the lease, Belleville schools superintendent Richard Tomko gave a long explanation about why the lease was necessary, that just about any rentable property in Belleville could be “connected” to someone and making the surprising statement that because the district needs the rental space, he didn’t care who owns the property.

Toward the end of the meeting, Barrera also spoke about the lease, stating the board needed to “judge real estate by the real estate, not by the owner of the real estate,” claiming to do otherwise would be “a disservice to our district.”

The lease is for office space at 335 Union Avenue, owned by Belleville Mayor Michael Melham. The property apparently houses his website company, AlphaDog Solutions. Additionally, it is the mailing address for both MM Holdings LLC and 170 Washington Avenue LLC, according to financial disclosure forms submitted to the New Jersey Local Finance Board. The website njparcels.com lists 170 Washington Avenue LLC as the owner of 170 Washington Avenue, the building neighboring Town Hall. Melham has stated publicly he owns the property, which has a storied history related to Melham and the Township of Belleville.

In addition to paying the rent, the Board of Education must pay for liability insurance on the rental space, with minimum coverage of $500,000 for single injury or death, $1,000,000 for injury or death to more than person and $500,000 for property damage. The Board must also pay for heat, electricity and gas.

Trustees Bennett-Meany, Tunis and Muniz successfully ran for the Board of Education in 2019 on the “Better Belleville BOE” ticket. Melham chaired and served as treasurer to their election campaign, according to campaign reports submitted to the New Jersey Election Law Enforcement Commission (ELEC.) Coincidentally, the “Better Belleville BOE” mailing address is listed on the report as being 335 Union Avenue.

Trustee Velez, elected last year, also has a connection to Melham. Melham’s 2022 re-election campaign paid $300 to the “Friends of Frank Velez” in October 2020, also according to reports submitted to ELEC. The expenditure appears to have been for tickets to a fundraiser, seemingly benefitting Velez’s Board of Education campaign. “Friends of Frank Velez” is mentioned on the “Frank Velez 2020” Facebook page.

Understandably, reasonable people might find questionable the ethics of elected officials voting to give financial benefits to someone connected to their campaign.

The New Jersey Code of Ethics for School Board Members, a state law enforced under the authority of the NJ School Ethics Commission, states:

“I will refuse to surrender my independent judgment to special interest or partisan political groups or to use the schools for personal gain or for the gain of friends.”

“No school official shall use or attempt to use his official position to secure unwarranted privileges, advantages or employment for himself, members of his immediate family or others.”

A key theme — and even an emphasized point — of many professional and public codes of ethics is the responsibility to avoid even the appearance of impropriety or a conflict of interest.

Can anyone reasonably argue that two, possibly three, board of education trustees — whose campaigns apparently benefitted from Melham’s assistance — voting to lease his property for school board purposes, doesn’t appear to be, at the very least, improper?

Mayor Melham has had little to say directly about the matter. At the January 26th Town Council meeting he made some quick comments (disclosure: my wife asked Melham about the lease during the meeting’s public comment portion. Melham’s remarks are from roughly 1:52:00 to 1:54:55.) In those remarks, Melham stated he would have “loved” to rent 170 Washington Avenue to the Board of Education, while further stating that the proposal was “legal,” had “no conflicts” and that it had been approved by the board attorney. Melham made similar remarks at the February 9th Town Council meeting (1:29:15 – 1:31:20.)

It seems odd that Melham — a man who has built a reputation on redevelopment, gentrification and real estate, and who regularly boasts to local realtors and developers about the “progress” he and the Town Council have brought to Belleville — apparently failed to appeal to commercial property owners in Belleville to work with Dr. Tomko on the rental space issue. Somehow, only his property was deemed “optimal.”

In 2014, then-members of the Board of Education disclosed that the school district incurred a $3.7 million-dollar deficit. Thanks in large part to the efforts of concerned citizens and Essex Watch (Belleville Watch’s parent site,) the New Jersey Department of Education appointed school monitor Thomas Egan to oversee district expenditures. The state also floated a $4 million loan to close the deficit, which Belleville property owners have been paying back to the state via school district taxes, to the tune of roughly $500K per year.

At the same time the state department of education became involved, Steven Eells, then-auditor for the state’s Office of Legislative Services, began investigating how the deficit came to be. Eels took several years to investigate and in 2018 he published a report of his findings. Persons familiar with what happened in the school district leading up to the 2014 deficit might look at the recent vote on the lease and conclude that it sounds a lot like things that happened seven years ago.

I e-mailed Bennett-Meany, Tunis, Velez and Barrera for comment on their “yes” vote for the lease; only Barrera and Velez replied. Barrera reiterated what he said at the end of the January 25th meeting. Velez wrote that he would make a statement about the issue at the next Board of Education meeting, scheduled for Monday, February 22nd.

I also e-mailed Tom Egan, the district’s state monitor, for comment about the lease, and received no reply. I e-mailed Dr. Tomko some questions, to which he replied with largely the same explanation he gave at the January 25th meeting.

Because both Tomko and Melham stated that the lease was reviewed and approved by the board attorney, I e-mailed Jonathan Busch, head of the Busch Law Group, which represents the board. I received no reply back.

I also sent e-mails to the New Jersey School Ethics Commission of the New Jersey Department of Education, and the Local Finance Board of the state Department of Community Affairs, for comment on the issue. Officials from both departments replied back, stating they wouldn’t comment in the press about suspected ethical violations without reviewing and ruling upon a formal complaint, if one were to be filed.

Finally, I e-mailed Melham himself for comment. His bilious reply is below.

What Are We To Think?

With few comments from those involved and state agencies abstaining from comment until or unless complaints are filed (and one has to wonder what happens even then; Belleville taxpayers have been waiting several years for comment from the New Jersey Attorney General on potential criminal matters related to the 2014 BOE deficit,) we are left with an apparent conflict of interest. Two, possibly three, board trustees voted to lease property from a sitting mayor, a man who furthermore materially or financially supported their campaigns. Another board trustee — now in his second term, and undoubtedly knowing how this vote might look to Belleville residents — voted for it anyway.

Some may very well chalk the whole matter up to necessity; the district may very well need more space; the board-approved lease of office space at 387 Union Avenue, as well as the full purchase of a residential home at 487 Greylock Parkway certainly point to that need. Dr. Tomko may very well be right in that many or most commercial rental spaces could be connected to one individual or another to whom people may object.

Others may defend the trustees who voted for the lease, that they intended well, and were simply following Dr. Tomko’s recommendation.

These explanations ultimately fall short. Yes, in a small town (which Belleville is, despite what some people would have it otherwise be,) you’ll come up with connections to those in power when it comes to real estate, but voting to lease from the mayor seems blatantly improper, no matter how “transparent” the process may have been.

Persons elected as school board trustees undergo training in things like school board ethics and conflicts of interest. Putting that aside, it stands to reason the board trustees who voted for the lease — especially those who benefitted from help the property owner provided their campaigns — could appreciate how their vote may seem improper, at least. Ethics and integrity would emphasize their individual or collective responsibility to avoid even the appearance of impropriety; they seem to have failed on those grounds.

Belleville residents have too long suffered the consequences of bad decisions their elected officials make; deep apathy and a “why bother?” attitude has prevailed as a result. In 2018, and in years successive, Belleville voters were promised something “better” than that.

Mayor Melham and the “Better Belleville” ticket ran on the promise of a clean break from the dirty politics and questionable governance that have plagued Belleville. The BOE’s approving the lease of Melham’s property — paying rent with taxpayer dollars — seems to be just the latest example of how “Better Belleville” hasn’t been better, just more of the same in a newer, sleeker bottle.

Belleville residents do indeed deserve “better:” better elected representatives with a higher sense of integrity and ethics, and who seek to preserve and promote Belleville’s best attributes. Belleville continues to await their arrival.