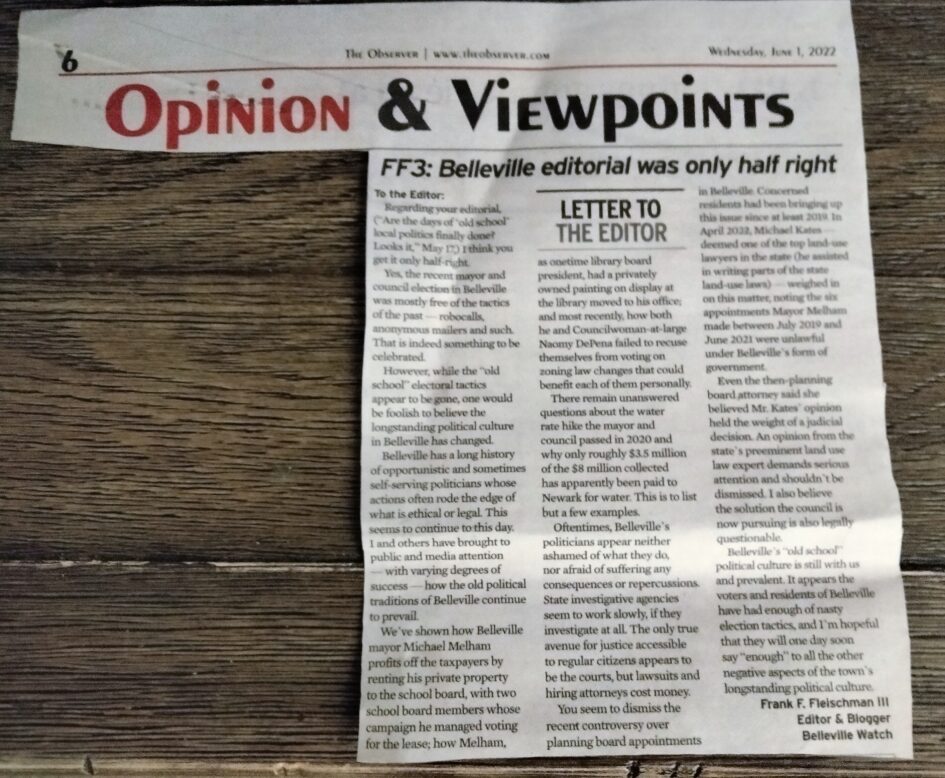 Recently, I sent a letter to Kevin Canessa, Editor of The Observer, calling him out on an editorial he’d written about Belleville’s May 10th election. He published it in the June 1, 2022 issue. I am reprinting it here.

Regarding your editorial, (“Are the days of ‘old school’ local politics finally done? Looks it,” May 17th,) I think you get it only half-right.

Yes, the recent mayor and council election in Belleville was mostly free of the tactics of the past — robocalls, anonymous mailers and such. That is indeed something to be celebrated.

However, while the “old school” electoral tactics appear to be gone, one would be foolish to believe the longstanding political culture in Belleville has changed.

Belleville has a long history of opportunistic and sometimes self-serving politicians whose actions have often rode the edge of what is ethical or legal. This seems to continue to this day.

Belleville has a long history of opportunistic and sometimes self-serving politicians whose actions have often rode the edge of what is ethical or legal. This seems to continue to this day. I and others have brought to public and media attention – with varying degrees of success – how the old political traditions of Belleville continue to prevail. We’ve shown how Belleville mayor Michael Melham profits off the taxpayers by renting his private property to the school board, with two school board members whose campaign he managed voting for the lease; how Melham, as onetime library board president, had a privately-owned painting on display at the library moved to his office; and most recently, how both he and Councilwoman-at-large Naomy DePena failed to recuse themselves from voting on zoning law changes that could benefit each of them personally. There remain unanswered questions about the water rate hike the mayor and council passed in 2020 and why only roughly $3.5 million of the $8 million collected has apparently been paid to Newark for water. This is to list but a few examples.

Oftentimes, Belleville’s politicians appear neither ashamed of what they do, nor afraid of suffering any consequences or repercussions. State investigative agencies seem to work slowly if they investigate at all. The only true avenue for justice accessible to regular citizens appears to be the courts, but lawsuits and hiring attorneys cost money.

Oftentimes, Belleville’s politicians appear neither ashamed of what they do, nor afraid of suffering any consequences or repercussions.

You seem to dismiss the recent controversy over planning board appointments in Belleville. Concerned residents had been bringing up this issue since at least 2019. In April 2022, Michael Kates — deemed one of the top land-use lawyers in the state (he assisted in writing parts of the state land-use laws) — weighed in on this matter, noting the six appointments Mayor Melham made between July 2019 and June 2021 were unlawful under Belleville’s form of government. Even the then-planning board attorney said she believed Mr. Kates’ opinion held the weight of a judicial decision. An opinion from the state’s pre-eminent land use law expert demands serious attention and shouldn’t be dismissed. I also believe the solution the council is now pursuing is also legally questionable.

Belleville’s “old school” political culture is still with us and prevalent. It appears the voters and residents of Belleville have had enough of nasty election tactics, and I’m hopeful that they will one day soon say “enough” to all the other negative aspects of the town’s longstanding political culture.