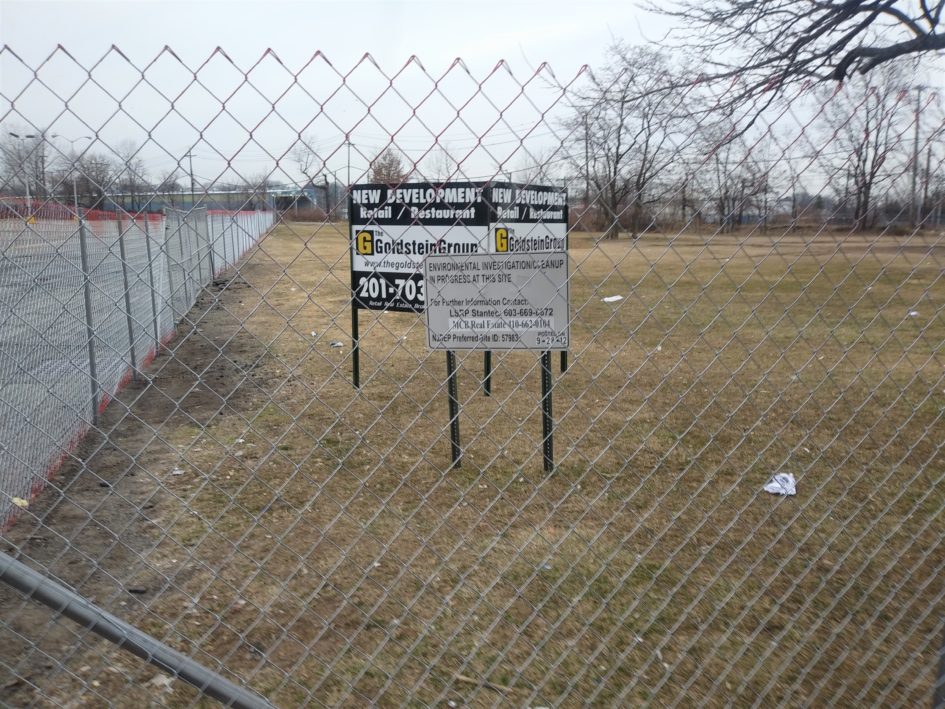 Above: Signs at 81-179 Belmont Avenue, commonly known as the “Old Pathmark” property, give conflicting messages: new development, and yet the need to remediate contamination left behind from when the property was occupied by companies owned by Thomas Edison.

(Editor’s Note: I had been involved in opposition to building anything residential on 81-179 Belmont Avenue since 2017. FF3.)

On Friday, February 21, 2020, with little to none of the fanfare common to groundbreaking a new development, Mayor Michael Melham and Councilmembers Vinny Cozzarelli and Thomas Graziano participated in a ceremony to begin the construction of a development that will bring retail space and 232 residential units to the property.

Many people would find such behavior from a politician odd, and rightfully so; groundbreaking on new development is often a politician’s bread and butter. Media, local citizens and dignitaries are invited, there are speeches about how wonderful the development is for the town, with an emphasis on the many jobs and tax revenue the development will generate. However, except for a few pictures on Mayor Melham’s social media after the event, most people wouldn’t have even known the groundbreaking ever happened.

The key question in people’s minds would be, “Why?”

Maybe it’s because there’s been a lot of attention brought to the property by concerned citizens — attention that maybe our local leaders would rather the property and its development not have. Since at least January 2017, when the Township Council requested from the Planning Board a study of the property to be deemed an Area In Need of Redevelopment (AINOR,) and up until the present day, there have been questions asked and concerns raised about the property. Throughout that time, one word has been commonly heard related to the property: contamination.

The Legacy of Thomas Edison and the Edison Chemical Works

Thomas Edison is known around the world as “The Great Inventor,” his genius for inventions venerated and his legend preserved. One thing about Edison and his work, however, rarely if ever makes it into the history books: a legacy of leaving pollution behind. 81-179 Belmont Avenue is part of that legacy, as it was once part of the property that held the Edison Chemical Works, also known as the “Silver Lake Chemical Works.” From approximately 1907 until the early 1970s, various products were manufactured there. The factories were torn down in the 1970s and a Pathmark supermarket building built around 1980. The Pathmark became a SuperFresh around 2016.

According to the book Edison’s Environment by Dr. George J. Hill (now in its third printing,) Edison built factories in Silver Lake that straddled the municipal boundaries of Belleville and Bloomfield, perhaps as early as the 1890s. Hill’s book takes personal accounts from former employees of the factories as well as news coverage from the time to show a picture of a workplace fraught with fires, inhumane work conditions and immense pollution of the site from the byproducts of chemical manufacturing, apparently for batteries.

The presence of pollution and contamination has been confirmed by reports from the New Jersey Department of Environmental Protection. A 2013 report of environmental testing and potential remediation for the property from 2004 to 2011 stated that testing and monitoring wells revealed levels of arsenic, lead, mercury, nickel and other heavy metals and chemicals that exceed DEP standards.

During the Planning Board hearings for the development on March 29 and April 12, 2018, several experts testified for the development. One of them was the site’s Licensed Site Remediation Professional, Craig Gendron. The LSRP is responsible for leading environmental investigations and remediation of contaminated properties. Mr. Gendron also testified that under the LSRP program, environmental cleanups can occur, for the most part, without New Jersey Department of Environmental Protection approval.

When asked about remediation of the Belmont Avenue property, Mr. Gendron reported that there were areas that were contaminated, or “impacted,” and that there were groundwater sources that needed to be remediated as well. He also reported that more than 300 tons of petroleum-contaminated soil had been removed. Mr. Gendron also stated that a remedial action plan had to be submitted to the NJDEP 60 days prior to construction commencing, and that all environmental controls had to be established. Concerning how the rest of the contamination would be addressed, Mr. Gendron stated that a plan for a “buffer and barrier system” would have to be in place to ensure “the public and anybody else can’t intersect the historic fill.” He further mentioned that “foundations, walkways and landscaped areas” would need to be planned for before construction could begin.

When questioned by Belleville resident Vincent Frantantoni, who asked if Mr. Gendron’s impression of the remediation plan was akin to “capping,” Mr. Gendron stated, “I’ve heard it called that before, yes.”

Mr. Gendron also noted that before remediation of the site could be considered completed, the NJDEP would have to issue permits to get a “required action outcome” status, which would seemingly conclude the remediation.

When considering the Belmont Avenue development — and even putting aside concerns of bringing in even more people into a town of 2.3 square miles and with a population of roughly 35,000 people, the potential additional traffic in an already high-traffic area, and the possibility of more children in our already overcrowded school system — the amount of work that needs to be done to even get through the state bureaucracy to have this property cleaned to state environmental standards is unlikely to be completed quickly.

The LSRP’s — and presumably the developer’s — plans to “barrier and buffer” the contamination present in the property’s soil is concerning. If people are going to live on that property, wouldn’t it be safer to ensure the contaminated soil is removed from the property? People looking to potentially live in the development would probably appreciate knowing the soil their apartment building is built upon is free of contaminants like arsenic and mercury.

With everything that needs to be done to at least clean the property to state standards, maybe the groundbreaking on February 21st was premature? With all the questions asked about, and the attention brought to, the contamination in the soil at 81-179 Belmont Avenue, is it hard to imagine why Mayor Melham might not have wanted a lot of fanfare?